The news broke at three minutes to four on a chilly winter’s afternoon in a two-sentence bulletin.

“The Communist party of China central committee proposed to remove the expression that the president and vice-president of the People’s Republic of China‘shall serve no more than two consecutive terms’ from the country’s constitution,” Xinhua, China’s official news wire, reported. “The proposal was made public Sunday.”

It was a typically dreary communique from the party-controlled propaganda agency. But to those who have spent their lives battling to decrypt the enigma that is elite Chinese politics, the text’s historic significance was unmissable.

“A bombshell,” said Susan Shirk, one of the United States’ foremost China specialists.

“I wasn’t anticipating such an open declaration of the new regime … I thought maybe he would stop short of this.”

“He” is China’s 64-year-old leader, Xi Jinping, a man who, after Sunday’s sensational and unexpected announcement, appears poised to lead the world’s second largest economy and one of its largest military forces well into next decade and quite possibly beyond.

“It means that for a long time into the future, China will continue to move forwards according to Xi’s thoughts, his route, his guiding principles and his absolute leadership,” said Shi Yinhong, an international relations professor from Beijing’s Renmin University.

Bill Bishop, the publisher of the Sinocism newsletter on Chinese politics, said the move confirmed Xi’s mutation into a species of “Putin-plus” – only Xi was “much more effective, much more powerful and, frankly, much more ambitious” than his Russian counterpart.

Shirk, who was US deputy assistant secretary of state under Bill Clinton, said: “What is going on here is that Xi Jinping is setting himself up to rule China as a strongman, a personalistic leader – I have no problem calling it a dictator – for life.”

The first five years of Xi’s reign, which began after he was named the Communist party’s general secretary in late 2012, have seen what many call the worst political crackdown in decades. Activists, dissidents and intellectuals greeted Sunday’s move with trepidation. 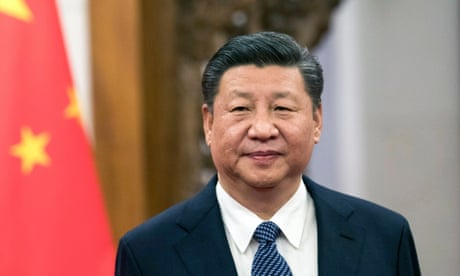 “It will get worse, for sure … the consequences will be very severe,” warned Wu’er Kaixi, a prominent Chinese dissident who fled into exile after helping lead the 1989 Tiananmen protests.

Wu’er, who now lives in Taiwan, was among those who signed an “emergency statement” condemning Xi’s decision to scrap presidential term limits as another step towards “tyranny”. “We shall not stay silent … this country is our country, and we cannot allow the ambitions of a few people lead [it] into a dark abyss,” the petition read.

Predictably, state media – from which China’s authoritarian leader has demanded “absolute loyalty” – put a more positive spin on the decision to scrap rules that were introduced in the 1980s to guard against the kind of catastrophic cult of personality that grew up around Chairman Mao.

An English-language editorial in the Global Times, a party-run tabloid, claimed “all Chinese people” backed the move and saw Xi as the right man to lead them into “a new era for a hopeful China”. “The change doesn’t mean that the Chinese president will have a lifelong tenure,” the newspaper claimed.

“Removal of the two-term limit of the president of PRC doesn’t mean China will restore life-long tenure for state leader. Such speculation is misreading,” tweeted the paper’s editor-in-chief, Hu Xijin.

“This was the one formal rule that could have blocked him from staying on and being leader for life. So eliminating it really brings the intentions out into the open and I think it eliminates any ambiguity about what is going on here,” she said. “He’s really made a power play that is stunning in its success.”

Jerome Cohen, a New York University expert in Chinese law and human rights, said China appeared to have forgotten “one of the main lessons of Mao’s long despotism” and be slipping into “another long period of severe dicatorship.”

For all Xi’s apparent dominance – achieved through a ruthless purge of rivals within China’s political, military and security establishment – experts believe his political project is not guaranteed to endure.

“A lot will depend on how the economy goes over the next 10 or 20 years,” said Steve Tsang, the director of the Soas China Institute. “If the economy continues to grow at 6% or 7% then the world will be a different one in 20 years time because China will be dominant.” A sustained economic slowdown, however, could consign Xi’s rule to the history books. “He knows that,” Tsang added.

Shirk agreed China’s “tragic” return to what she called “a kind of neo-traditional dictatorial system” was fraught with danger for both the country and its leader.

“When you are surrounded by sycophants, yes men, people who are too afraid to tell you what they really think, then there is a risk that the leader makes bad decisions,” she said.

“I’m not saying that we are going to have a famine like the Great Leap Forward or that China is going to turn into chaos like the Cultural Revolution. But … already there are some bad decisions being made.”

To illustrate her point, Shirk pointed to a new city being built near Beijing (“That is the sort of thing dictators always do. Don’t they love to do that?”) and Xi’s “overblown” signature foreign policy project, the Belt and Road infrastructure campaign which she claimed was facing a growing global backlash.

Xi’s relentless tightening of political and social controls also carried risks. “It’s hard for me to see how this kind of police state that puts such severe restrictions on civil society and on information and on the educational system is really going to be a successful modern China,” Shirk said. “I expect there is going to be some form of push back eventually – he’s already lost the intellectuals.”

Wu’er said was outraged but not surprised by Xi’s power grab and hoped it would serve as a wake-up call to western leaders who had ignored dissidents’ warnings about China’s leader and instead “nurtured” Xi’s ambitions to become “a new 21st century dictator”.

The international community had enabled Xi by showering him with gifts and praise, the veteran activist claimed.

“Now he has become this monster that we are about to see.”

… we have a small favour to ask. More people are reading the Guardian than ever but advertising revenues across the media are falling fast. And unlike many news organisations, we haven’t put up a paywall – we want to keep our journalism as open as we can. So you can see why we need to ask for your help. The Guardian’s independent, investigative journalism takes a lot of time, money and hard work to produce. But we do it because we believe our perspective matters – because it might well be your perspective, too.

I appreciate there not being a paywall: it is more democratic for the media to be available for all and not a commodity to be purchased by a few. I’m happy to make a contribution so others with less means still have access to information.Thomasine F-R.

If everyone who reads our reporting, who likes it, helps fund it, our future would be much more secure. For as little as £1, you can support the Guardian – and it only takes a minute. Thank you.